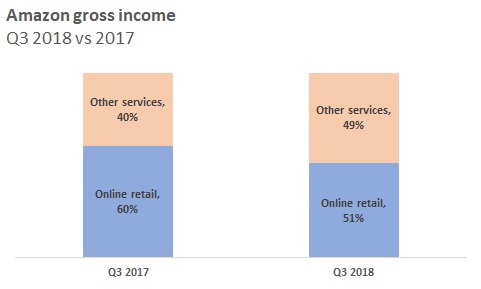 Although Amazon announced third quarter sales 2017 were “up 29%” its retail sales were surprisingly weak – and its profits from retail outside North America may not have improved as much as they seem to have at first sight.

Amazon is frugal in the information it provides about sales and profits. Its top-line performance numbers for 2017 may well hide more than they reveal. By any standards, Amazon is a huge retailer. But it’s not clear where its priorities lie

Third party services is gross income from products sold on Amazon by third parties. About a third of the selling cost: so $31 bn in income represents about $90-100 bn sales.

Subscription services is fees from Amazon Prime, and from other “all you can eat” deals. It is not clear anywhere in the results how much expenditure needs to be offset against this income for the cost of services provided. This is not just product handling and delivery, but the production cost of Amazon video, royalties on much of Amazon’s free music downloads and discounts and cashbacks to Prime members

Other, Amazon says in Q3 2018 “primarily includes sales of advertising services, as well as sales related to our other service offerings” such as “our co-branded credit card agreements” However, there is no sign of any actual income from such agreements”

Amazon has almost no history of retail profit outside North America

For all Amazon’s claimed “retail dominance”, its historical record shows scarcely any profit from retail at all since its first annual report in 1998. Indeed, for reasons no-one can understand, it does not break out its extraordinary European retail losses in the annual 10K report filed with the US Securities and Exchange Commission (SEC). But the billion-dollar loss is in data filed with the Luxembourg government, which we discuss on this site.

The table below is from Amazon’s 2017 10K, but we have separated the sales and profit for Europe declared in its Luxembourg filings from  the “Rest of world” data in the 10K

In Q3, things seem to have got better. Sales in $billion:

The retail numbers Amazon quotes are misleading, though:

Amazon’s sales and profits are certainly growing, if opaque. But, whatever they are, they no longer seem generated by real retailing