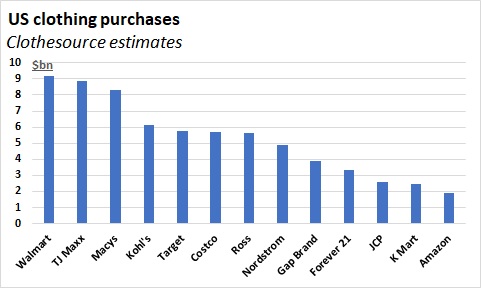 Estimating how Amazon ranks in the US clothing market is tricky – and often leads to real overstatements. With their Q3 results about to be announced, it’s worth looking at how successful Amazon’s really been.

Amazon famously publishes little to no data about sales and profit in its retail business, though we now know it lost around a billion dollars in its European operation last year. What data exists is doubly confusing, since:

Both problems seem to run against a view expressed by a number of commentators recently. The problem starts with the graph below: described earlier this year by the research company producing it, Coresight, as “where respondents have bought apparel or footwear over the past 12 months” 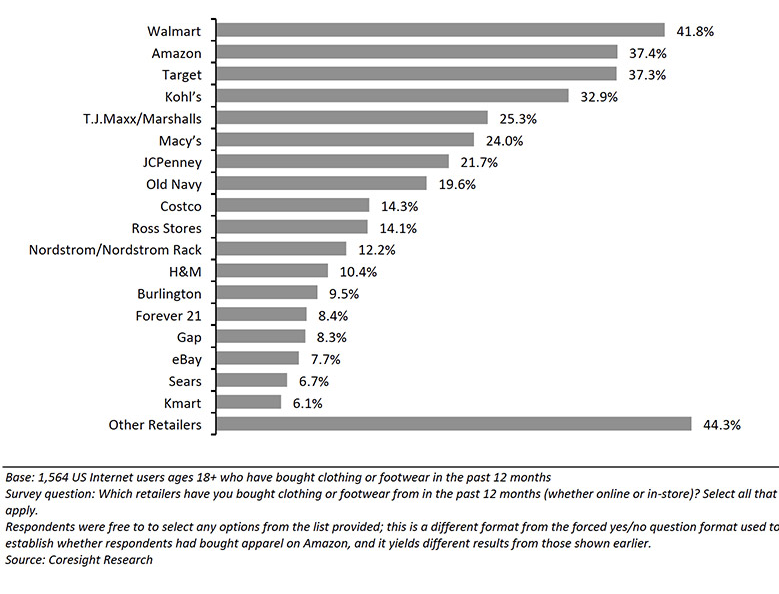 But another company, Quartz, implied in February that the chart shows “Amazon is now the biggest clothing retailer in the country based on merchandise volume”  It’s not totally clear Quartz  think exactly that, though.

But  Morgan Stanley claims more or less that. Amazon “will become the top player of the US apparel industry in 2018“, they said in April, , producing the chart below.  “Brands are plugging the department store ‘leaky bucket’ hole with growth on Amazon.com”, it adds. And its views are still being repeated around the Web. 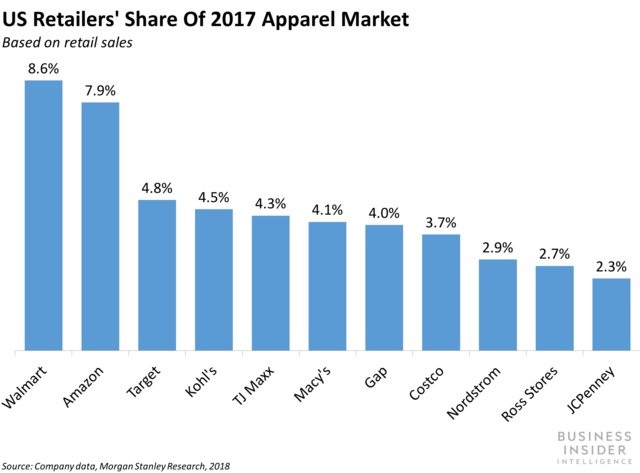 But there’s a snag

Neither chart correlates well with these companies’ public statement of their US clothing sales: 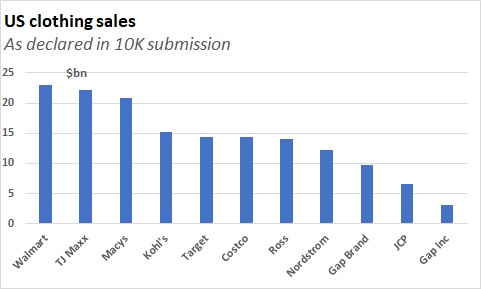 These statements seem to say that:

There are four reasons for being very sceptical about Coresight or Morgan Stanley  accurately telling us Amazon’s share.

Why is the Euromonitor theory important?

Euromonitor claims total US sales through Amazon are $24.8 bn (compatible with both Coresight’s and Morgan Stanley’s projections), but that Amazon sells only $4.8 bn of them, with the other $20bn sold by third parties – and therefore bought from clothing factories by third parties. This means, of course, that Amazon’s own purchases  are way behind conventional retailers’. If they all sold at a 60% gross margin, here’s how the purchases of the top 14 would look:

And this after five years’ trying to establish itself in the market. Amazon’s operational doctrine (“match or undercut pretty well everyone on price”) is fundamentally unsustainable. With a huge range, it’s got less than a fifth of Walmart’s apparel buying power. It’ll lose a fortune matching Walmart’s prices.

With or without greater efficiency. And, as  The Emperors’ Clothes argues, Amazon has no operational efficiencies over its conventional big brothers in selling clothes.

As became obvious back in April: it’s now just conventional wisdom that Amazon’s hopeless at selling clothes in Europe.

Is it really just as hopeless in the US?