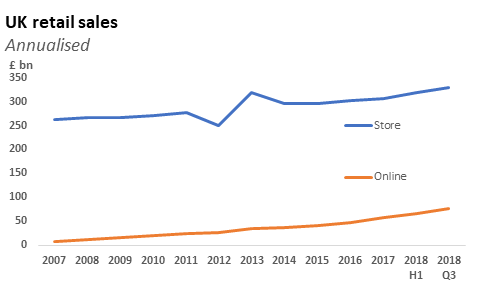 September’s release from Britain’s Office of National Statistics show that sales in physical stores are still growing. They were 3.1% up year on year in September, and 3% for the third quarter of the year. Online sales did better: quarter 3 was up 14% on 2017.
Online and offline sales kept growing, though: they have since e-commerce first took off.

Online ordering now accounts for 18.2% of retail. This (though with a 9.6%  share for online) follows the same pattern as American data from its Census Bureau. E-commerce data, though, is available only up to June. 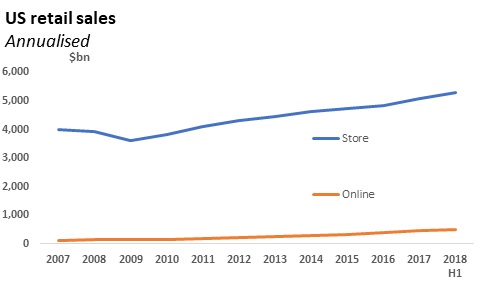 Stories of a “Retail Armageddon” – either for retailing generally, for physical stores – really are far-fetched.

Is UK clothing the exception, though?

Until the first quarter of 2018, UK clothing sales followed the same pattern as retail sales generally. But, since spring, clothing sales seem to have begun moving away from physical shops. 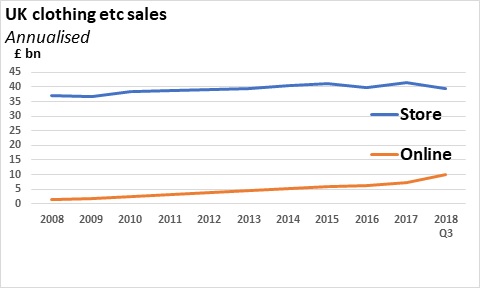 They haven’t really, of course. Many garments are “showroomed” first – selected in a physical shop, then ordered online. Or collected from a store, or taken back to one if they don’t fit or customers change their minds. So if 82% of clothes are still entirely bought in stores, the overwhelming majority of the other 18% still involve a trip to a physical store.

With the past few years’ growth in clothes-buying traffic to physical stores, we’ve seen more opportunities than ever for professional retailers to drive extra sales.

But physical stores’ traffic seems to have fallen back to 2016 levels. As we explain in our “Emperors’ Clothes” report, clothes stores seem to have got their priorities wrong.