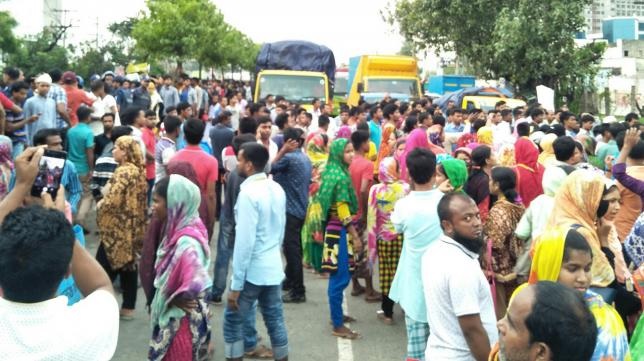 Posted in The Bangladesh Miracle

Does it still take union action to get compensation in a Bangladesh garment factory?

On May 4, a Bangladesh garment worker took ill. His condition was ignored by his superior, so he died.

The tragic death took his colleagues out onto the street demanding justice. Sounds familiar?

Well, it wasn’t quite the way you might imagine. 25 year old Rashedul Islam seems to have taken ill while working at H R Textile Mills during the morning of May 4. It seems as if his bosses wouldn’t let him get off at first, but later that morning they did and he was taken to hospital. He was declared dead at 2.30 pm.

There’s no evidence his illness was connected to his job –  or that it wasn’t, to be fair. But by 5 pm, about 2,000 of his colleagues blocked the main road outside “demanding compensation”. Demanding, in fact, a million taka ($11,000). Which, at a national average wage of  $1,800 is approximately 6 years’ wages.

Now we may not be getting the full story: all kinds of strange facts might be getting covered up. Islam might have been in a fight, the victim of a protection racket or badly maimed in an industrial accident for example. I’ve worked for lots of companies, and I’ve never known a 25 yo get 5 years’ wages in compensation for losing a job: not even a single mother with five children. Nor met many protesting workers smash cars up either.

But just remember this story the next time an over-excited activist works himself (or herself) into a lather of outrage about Bangladeshi working conditions.

Nothing’s ever quite what it seems