Gap, Walmart and the AFBSB are the last things to demonise over factory safety

It’s as silly to demonise Gap and Walmart for not signing the Accord on Fire & Building Safety in Bangladesh (AFBSB) as to think it differentiates European and US attitudes to business.

But that hasn’t stopped the usual vitriol being hurled at Gap and Walmart over not signing it, or new, sillier, vitriol from people who ought to know better about its substance. And all mask the real issues
First, when it comes to safety, there are far bigger demons in this world than Gap and Walmart.
There were a few names missing from the list of Western businesses with garments going through the factories at Rana Plaza when it collapsed. And Gap, Walmart, Nike and Levi were high among them. Activists quibble that such businesses can’t be guaranteed to keep on supporting the upgrading of Bangladeshi factories forever without a legally enforceable contract. But the absence of such a contract hasn’t stopped Nike and Levi from almost impeccable operations in Bangladesh for some year now. And both Gap and Walmart have been pouring money into Bangladesh for the past few months.
Both have shown some commitment to the country in the future as well. Which is more than, for example, Disney has. And a lot more than anyone in Japan has.
Second, this isn’t about the difference between Europe and America. It’s silly to pretend that attitudes to safety in Bangladesh show some kind of difference between Europe and America. Here’s a list of the top 11 national apparel markets, in order of size (billion dollars at retail prices, 2012) apparel imports from Bangladesh (million dollars at landed prices, 2011) and the percentage of their national apparel market controlled by  businesses that have signed the AFBSB 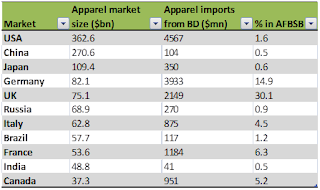