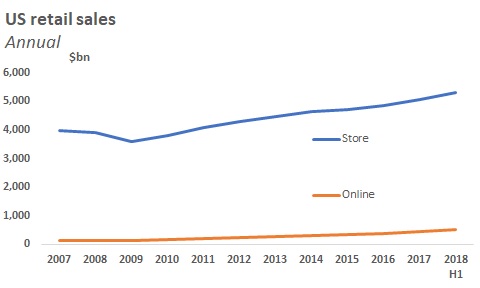 Many observers claim Sears recently filed for bankruptcy because it couldn’t compete with Amazon.

But we believe the effect of Amazon – and other online retailers – on Sears is widely over-rated.

The US Census Bureau shows that goods ordered online had just 9.6% of retail sales in the first half of 2018. Sales through physical stores were 4.2% higher than they’d been a year earlier. They’ve been growing almost since e-commerce started.

But well run retailers are doing fine. The biggest clothing specialists on either side of the Atlantic (Inditex and TJX) have just upped their sales and profit forecasts.

Sales through physical stores have kept growing in the UK as well, Britain’s Office of National Statistics reports. Sales in the third quarter of 2018 were 3.1% up on a year earlier.

In Europe, online fashion retailer ASOS has just reported healthy profits. But Primark makes more profit than any other UK clothes retailer – because it doesn’t sell online, not despite it. TJX Cos and Ross Stores, America’s most profitable clothes shops, scarcely sell online either.

Our new report, “The Emperors’ Clothes”, shows how many other myths abound

In both Britain and the US, more people are working in retail today than a decade ago

So the problem’s not about inevitable shifts in consumer purchasing: the main problem lies with many retailers’ management.

The “Emperors’ Clothes” report looks at twelve areas where underperformers can learn from the successful. There are examples of both in both physical and online retailing

Worst of all, though, is that Amazon’s billion-dollar loss implies that it’s selling below cost. With seemingly limitless ability to raise money and chasing sales growth, what other explanation can there be?

Amazon seems to be dragging the whole industry into a downward spiral of price-cutting and vanishing margins.

But successful retailers have fought this. The “Emperors’ Clothes” report shows how.