US sales stop getting worse – for now at least

The Clothesource US Clothing Sales Index got 27% better in December – though most media tried their best to keep it secret.

Like for like sales at the 16 largest US clothing retailers who publish monthly sales fell 8.3% in December over 2007 – on the face of it a great deal better than the 11.3% fall they showed in November. Total sales got “better” too: down 5.6%, compared to a November fall of 9.2%. And it wasn’t just a strange Clothesource sample: America’s International Council of Shopping Centres estimates all chain store like for like sales fell 1.7% in December over December 2007 – a substantial “improvement” over November’s 2.7% fall (the ICSC data includes supermarkets, which aren’t having anything like as rotten a time right now as clothing stores – never mind the hard goods sections of department stores. 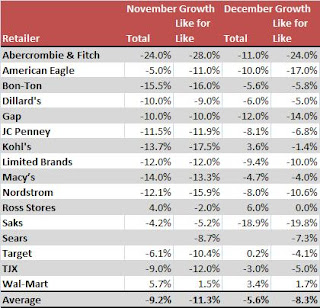 We’ve less clear evidence about profitability of course: we know a lot of December’s sales were the result of aggressive margin reductions – and for many US chains, the cost of this is still an unknown, since there’s a negotiation still to be had with suppliers about markdown money, and how much of it’s going to pay for all that discounting. And that’s really the point.

It’s clear that the sales pain varies a lot from chain to chain. Sales at some of the chains gossips like to undermine most – like Ross, Bon-Ton and Sears – are actually doing a lot better than average. It’ll be a while before it’s clear what falling sales are really doing to margin and to liquidity: no-one really believes we’ll go through 2009 without some substantial apparel retailer getting into serious trouble, and it’d be just silly to kid ourselves sales aren’t going to take a turn for the worse sometime this year.

But it’s just as silly to pretend – as too many commentators have over the past day – that America’s December sales figures are another sign of gloom. They’re certainly a clear sign the recession is going to be with us for a while still, and retailers’ commentaries about driving inventory down implies orders to suppliers are likely to fall disproportionately.

Above all, though, they’re further evidence some people do well in the worst of times. And that there’s more to clothes retailing than just watching things get worse.