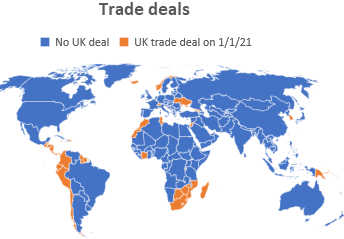 The countries with which Britain will have its own trade deal on December 31 account for less than 1% of its clothing imports.

So if it really does exit its Brexit transition period  on a “No Deal” basis, virtually all its clothing imports will be subject to 12% import duty. In addition to the costs of the inevitable (and, for 40% of them, new) border controls unseen in Britain for quarter of a century

Ever since 2016, Brexit advocates – and successive Conservative leaders – have assured the British public that exit from the EU would mean preferential trade deals – on terms more advantageous to the UK than those secured by the EU – with most of the rest of the world. This now  appears at best a fantasy.

The map – and the official list – excludes Japan, with which Liz Truss, the UK’s trade secretary, has signed an agreement as she cannot guarantee it will be ratified by December 31. The distinction between “agreement” and a ratified deal that can be used at borders is important, and typically takes two to three years. So when Ms Truss spoke on October 29 of her ambition “to cover 80 per cent of UK trade in free trade agreements by 2022” she meant at best that she might see those deals effective by 2025 – after her government needs to seek re-election